Chin and jaw implants (or mentoplasty) serve to enhance the bone contour of the chin area for men. Most commonly, chin and jaw augmentation surgery improve an under projected or “weak” chin, in order to balance out all facial features and improve the overall aesthetic appearance of the face. Generally, this augmentation is completed with the use of a specially fitted implant that is placed subcutaneously. 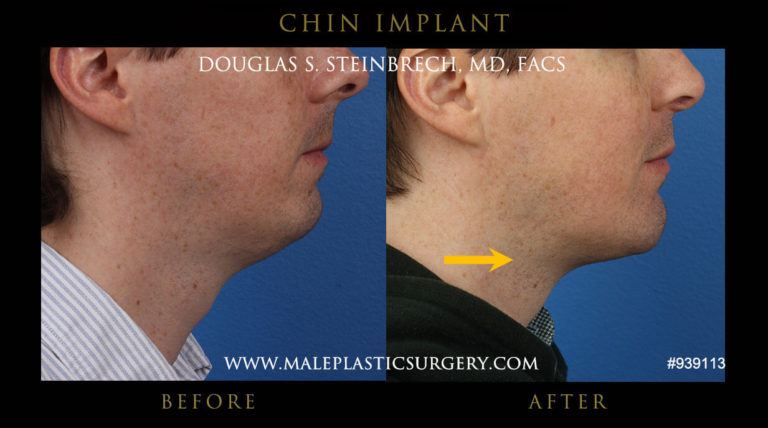 How Is Chin Augmentation Performed On Men?

Chin augmentation surgery can be performed with patients fully awake, using either a local or general anesthetic (at the discretion of the patient). An incision is made below the chin or inside the mouth, at which point the overlying tissues are lifted off of the chin bone and the implant is placed. Once the implant is placed over the deficient chin bone, the incision will be closed with sutures. Most chin augmentation procedures are performed in around thirty minutes.

When it comes to facial aesthetics, the chin and the nose are closely linked. A weak, less-than-prominent chin will usually make a strong nose seem unnaturally large. For this reason, chin augmentation surgery is often performed in conjunction with rhinoplasty.

Although much of the preparation will be psychological, there are a few tangible things that men in Chicago can do to prepare for chin augmentation surgery. In the weeks leading up to the procedure, it is important to cease using cigarettes (and other nicotine products) as well as any blood-thinning medications, such as aspirin. In preparation for recovery time, patients should notify employers and apply for at least one week of leave from work. As patients will be unable to drive in the immediate postoperative period, you should also arrange for transportation from Dr. Steinbrech’s practice.

Who Is A Good Candidate For Chin Augmentation Surgery?

Chin augmentation surgery is especially desirable for men with weak and unpronounced chins. A weak chin often throws off the aesthetic balance of the face; chin augmentation seeks to restore symmetry and aesthetics to your facial features. Men who are unhappy with the profile view of their face are particularly compatible with chin augmentation procedures, and any men over the age of 18 can be considered for surgery. 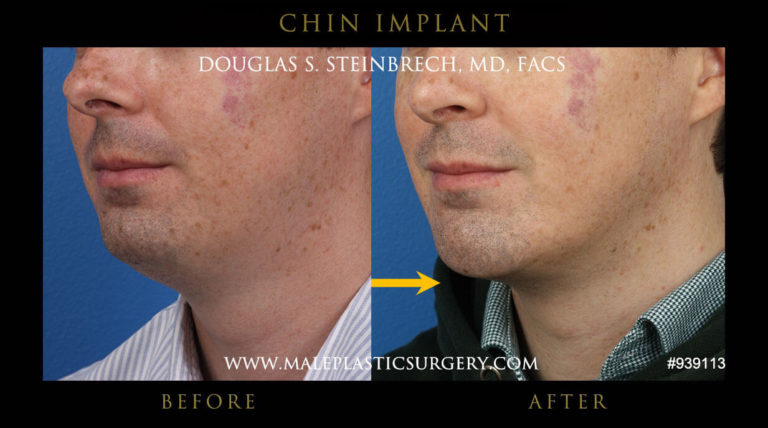 You Are A Good Candidate For Chin Augmentation If:

What Can I Expect From Chin Augmentation Recovery?

As chin augmentation is an invasive procedure, it does require some recovery time. After surgery, the incisions are stitched up, and pain and swelling are prone to occur. Most swelling peaks within 24-48 hours after surgery, and fully reduces about one week after surgery. Most men are able to return to work within a week as well, although strenuous exercise should be avoided for around 10 days. Dr. Steinbrech and his team of specialists will advise each individual about their recovery, including restrictions on diet and physical activity. Details concerning dental hygiene will also be provided by the team.

Patients interested in chin or jaw implant surgery are encouraged to reach out to our patient care coordinator. Book your consultation for chin augmentation to see the best options for you.